Experts offer tips on how to stay safe. For one, don’t plan on shouting or cheering with your friends.

For millions of football fans, Super Bowl Sunday has become the equivalent of a major holiday. It’s like Thanksgiving, only with way more shouting, drinking, hugging and dipping into shared snacks. But this year, public health experts are urging everyone to tone it down and take special precautions when watching the big game.

“I know that no one wants to be the guy that got hospitalized or died because of the Super Bowl,” said Dr. Joshua Barocas, an infectious diseases physician at Boston Medical Center. “With the highly transmissible variants around and a largely unvaccinated public, we are all at high risk.”

Last year, gatherings to watch Lakers games during the N.B.A. finals were believed to have accelerated the virus’s surge in Southern California, officials in Los Angeles said. And after the fall and winter holidays, coronavirus cases spiked in some parts of the country as people skirted public health guidelines to celebrate with one another.

Now, after what has been nearly a year of social distancing, Sunday’s matchup between the Tampa Bay Buccaneers and the Kansas City Chiefs is beckoning.

“It’s not like Thanksgiving where millions and millions are traveling, but will we see cases linked to Super Bowl parties at people’s homes? I think most definitely yes,” said Joseph G. Allen, an expert on indoor environmental quality at the Harvard T.H. Chan School of Public Health. 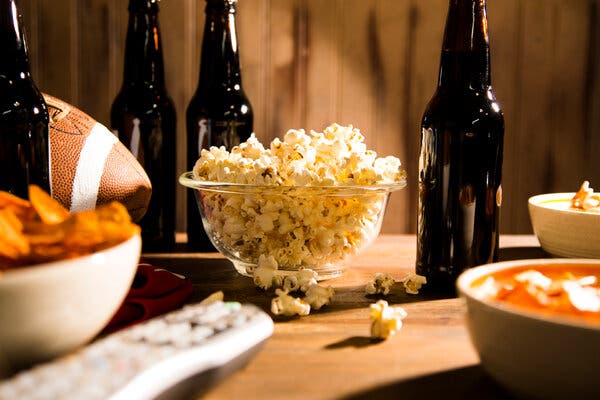 According to a recent Seton Hall University survey of more than 1,500 adults across the country, 58 percent said that they will watch the Super Bowl this year. And of those, a quarter are planning to do so with people from outside their households. Another study, from the National Retail Federation, found that 28 percent of those who intend to watch the Super Bowl are planning to either host or attend a party, or watch the game at a bar.

The experts we spoke with echoed recommendations from the Centers for Disease Control and Prevention that the safest way to watch the game is at home with only the people you live with. And in recent surveys, most Super Bowl fans have indicated that this is exactly what they’ll do.

Gathering with people from outside your household is taking a risk, Dr. Allen said.

You can still include other family and friends virtually. The C.D.C. recommends connecting with others by sharing recipes, starting text chains or hosting a party online. You can use Zoom, Google Hangouts or streaming services with virtual group watch features.

Sandra Albrecht, an assistant professor of epidemiology at the Columbia University Mailman School of Public Health in New York City, is planning to attend a watch party on Zoom.

“I’m a huge football fan, and I watch the Super Bowl every year,” she said. “But this is one year where my family and I will forgo any in-person parties and will instead enjoy the game in the remote company of family and friends.”

Another potential benefit of sticking with only the people in your household: It can be less stressful. You don’t have to worry as much about who’s double dipping in the salsa or if the windows are open wide enough.