States in the US are Pulling Back Vaccine Doses

It did not take long for Keith Reed, a deputy health commissioner in Oklahoma, to spot a big logistical problem with the state’s vaccination rollout. Week after week, Oklahoma was allocating thousands of precious doses to a federal program for nursing home patients that was not using them all. In fact, tens of thousands of doses were sitting untouched in freezers.

So his department called an audible. It decided to stop allocating any more of Oklahoma’s vaccine supply to the federal program, a partnership with private pharmacies like CVS and Walgreens that is meant to immunize residents of long-term care facilities. Instead, they would go to distribution channels that would get them into people’s arms faster.

A number of states have made similar moves to shift supplies away from the federal effort, known as the Pharmacy Partnership for Long-Term Care Program, a telling example of how chaotic the inoculation effort in the U.S. has been so far. Some of the other states include Minnesota, Maine, Michigan, Missouri and Ohio.

Mr. Reed said the Oklahoma move would do no harm: Walgreens and CVS have assured him, he said, that all nursing home residents in the state who needed — and wanted — to be vaccinated would have the first of their two shots by the end of the week. 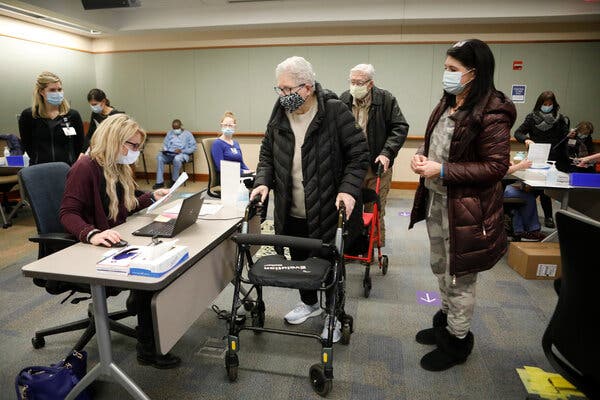 States in the US are Pulling Back Vaccine Doses

The federal program used a formula that turned out to significantly overestimate how many shots would be needed for long-term care facilities like nursing homes, whose residents are particularly vulnerable to the coronavirus. And another problem arose: A considerable number of residents and, especially, workers at the facilities are turning down the chance to be vaccinated.

A study released Monday by the Centers for Disease Control and Prevention found that in the first month of the program, 77.8 percent of residents and 37.5 percent of workers received the vaccine at the average long-term care facility. The study says the true rate for workers may be higher because some may have been vaccinated in other settings. But, even so, federal officials are particularly concerned about how many workers are refusing inoculation, and have been stepping up efforts to change their minds.

Mr. Reed said the doses Oklahoma was taking away from the federal program will be going to thousands of Oklahomans who are 65 or older and do not live in nursing homes.

“Our goal is to move vaccine from freezers to somebody’s arm within seven days of receiving it,” Mr. Reed said in an interview last week. “We just had a hard time with that amount of vaccine off-limits to us that was set aside for this program, when we could be using that vaccine to go straight to Oklahomans.”

“If we find that older adults are not getting the vaccines that they need, then that’s concerning to us,” said Lisa Sanders, a spokeswoman for LeadingAge, which represents more than 5,000 nonprofit aging services providers.