The levels of male sex hormones are regulated by a series of glands and their hormones. The pituitary gland in the brain influences hormone production in the testicles under the guidance of the hypothalamus. A relatively uncommon cause of male infertility is the failure to make enough of the hormone gonadotropin.

The pituitary gland in the brain releases hormones called gonadotropins, which stimulate the testicles to produce sperm. In a small number of cases, male infertility is caused by insufficient levels of these gonadotropins. Taking these hormones as medication may boost sperm production. 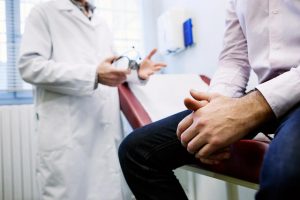 Functional problems that can cause or contribute to male infertility include:

The major causes of male infertility are:

Sperm are made in the testicles, then they spend two to ten days passing through a series of small tubes called the epididymis where they mature and exit into a larger tube called the vas deferens. The vas deferens empty the sperm into the ejaculatory duct, where they are mixed with seminal fluid from the seminal vesicles and the prostate gland.